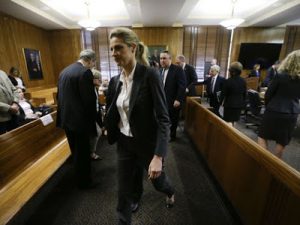 This just in: after deliberating for about seven hours, the jury in the Erin Andrews case returned a verdict of $55,000,000.00. It is likely that an appeal will follow, and the parties may negotiate. For now, you can read this recap by The Tennessean:

After an emotional nine-day negligence trial that often found Erin Andrews in tears, a Nashville jury on Monday awarded the television broadcaster $55 million, to be paid by her stalker, a local hotel’s management group and its owner.

Andrews looked jury members in the eye as they entered the courtroom to deliver their decision after seven hours of deliberation. Minutes later, after the verdict was read, she wiped away tears as she hugged and thanked some of them individually. A court staffer brought her a fresh box of tissues while her parents embraced her legal team.

“The support I’ve received from the people of Nashville has been overwhelming,” Andrews said in the statement, posted on her Twitter account shortly after the decision. “I would also like to thank my family, friends and legal team. I’ve been honored by all the support from victims around the world. Their outreach has helped me be able to stand up and hold accountable those whose job it is to protect everyone’s safety, security and privacy.”

Andrews filed the lawsuit about six years ago against Michael David Barrett, a man who secretly recorded her through an altered peephole in her room at Nashville Marriott at Vanderbilt University in September 2008, and the hotel owner and operator. She also sued Marriott International, but Circuit Court Judge Hamilton Gayden dismissed claims against the hotel giant in late January saying that, among other reasons, the franchisor was not responsible for security at a local hotel.

Andrews had sought as much as $75 million from Barrett; the hotel owner, West End Hotel Partners; and the hotel management company, Windsor Capital Group.

Jurors found Barrett 51 percent at fault in the case, which would mean he would have to pay 51 percent of the $55 million award. The jury said West End Hotel Partners and Windsor Capital Group were on the hook for the remaining 49 percent.

Mark Chalos, a Nashville attorney who has been analyzing the Andrews case for The Tennessean, said the decision showed “the jury realized that Ms. Andrews is the victim here and that Nashvillians recognize an injustice when they see it.”

Marc Dedman, a lawyer for the hotel operator and owner, told reporters he was disappointed in the jury’s decision and said that they had cooperated with the investigation into the nude video.

Many observers had criticized Dedman’s legal team for deciding to question Andrews on her explosive career success after the videos were leaked. Dedman said it “was not our argument” that Andrews thrived because of the widely circulated videos.

Dedman said that the hotel industry has changed as a result of the case, calling what happened to Andrews a crime.

In statements released after the verdict, West End Hotel Partners and Windsor Capital Group said the safety of their guests was a top priority.

“These acts Mr. Barrett committed serve as a reminder to the hotel industry to review safety and security procedures that ensure a first-rate experience to all guests,” the statement from West End Hotel Partners read.

Patrick M. Nesbitt, CEO and chairman of Windsor Capital Group, apologized for “the unfortunate experience (Andrews) encountered while she stayed at the Nashville Marriott at Vanderbilt.” He said the incident “should serve as a call to action for the entire hotel industry to be diligent in ensuring our guests’ safety and privacy.”

The trial began on Feb. 22, and the jury heard seven days of testimony. They heard from hotel executives and front-desk staff; from hotel safety experts and a social worker and a psychologist; from a former NFL player who worked with Andrews; from the stalker and from Andrews and her parents.

Andrews described in two days of testimony how the videos going viral on the Internet in July 2009 turned her into a shell of her former self, and how she has devoted herself to her career as way to cope and prove she is a professional, not the woman known for the peephole scandal.

The jurors also saw 4 1/2 minutes of video Barrett secretly recorded of Andrews nude in her hotel room on Sept. 4, 2008, while she prepared for a Thursday night Vanderbilt University football game, and a 6-second clip he recorded of her in Feb. 2008 at a hotel on Ohio State University’s campus. At the time, Andrews worked as a sidelines reporter for ESPN.

Barrett tried to sell the videos to celebrity gossip website TMZ but was turned down. He then posted them online.

Andrews was unaware of the videos until July 2009, when they began spreading around the Internet like wildfire, and on the day she had been auditioning for “Dancing with the Stars.” She now works for Fox Sports and co-hosts the dance competition show on ABC.

According to trial testimony, in just six years the videos were watched more than 16.8 million times.

Attorneys for the hotel, led by Dedman and Brent Usery of Spicer Rudstrom law firm in Nashville, argued at trial that Barrett alone was to blame and said the hotel companies could not be held responsible for his criminal actions. They also focused questions on Andrews’ success after the videos were leaked.

Barrett pleaded guilty to a federal stalking charge in 2009 and served 20 months in prison.