The Erin Andrews Trial: Recap of the 9th and Final Day of Trial 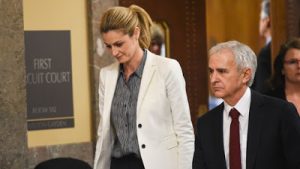 Erin Andrews and her hotshot attorney, Bruce Broilett, on the last day of trial.

The Erin Andrews trial has now concluded. All the witnesses have testified, all the evidence has been presented, and closing arguments are complete. Now it is in the hands of the jury.

Here is what happened on the final day of trial:

In my last trial, the jury instructions were not finalized until just a few hours before they were read and distributed to the jury. Both I and the other attorney, and also the judge, spent countless hours trying to get them right. It was a five day jury trial and I would retire to the hotel I was staying in after a grueling day of trial, only to have to get to work revising the jury instructions yet again. This is partly because the trial was in a case involving violations of the Ohio Consumer Sales Practices Act, Ohio’s main consumer protection law, which can get extremely complicated. The several hours that were spent in the Erin Andrews case arguing over jury instructions must have been absolutely exhausting for the attorneys after going at it for eight days already. They undoubtedly just wanted to get to closing arguments and wrap up the trial, but they had to be on their toes because when you are arguing over jury instructions you are making sure that the instructions are as clear and as favorable to your client as the law will allow, and you are also “preserving the record” in case the Court makes a mistake with jury instructions in favor of the other side and you have to appeal. A good appeal starts with knowing how to preserve the record.

2. Erin’s lawyer and the lawyer representing the groups that own and operate the Marriott gave their closing arguments. Bruce Broilett, one of Andrews’s attorneys and the one who gave the closing argument on her behalf, is one of the best Plaintiff attorneys in the country. In fact, he is a $3.3 billion dollar man. Defense attorney Marc Dedman, who closed on behalf of the defense, is in the same league, charismatic and polished with an endless list of notable accomplishments.

Here are some highlights from their closing arguments:

Erin’s lawyer told the jury that their verdict (the amount of money they ultimately award) will “be putting a value on following the standards and the safety precautions we’ve been hearing about.” He referred to Robin Williams, saying that the people we see on TV and in film, who appear to have an ideal life (as many must think that Erin Andrews does) “also have a personal life. And sometimes that personal life is much more challenging than what lights up when they are on camera.” He told the jury “long after your verdict, this [referring to Erin’s emotional distress] will still be going on. And your verdict has to account for that, past and future.”

He talked about the “chest-pounding, heart-pounding, trembling and vomiting that Erin experienced when she had to meet with the FBI and identify the stalker, as well as the conspicuous red rash that popped up all over her neck when she went on Oprah. As I suspected he would do, he cited to the number of times the video has allegedly been seen – almost $17,000,000.00 – and he suggested the jury might award one dollar for each time, reminding the jury that about 600,000 people seem to be watching the video per year on average and asking the jury to take future views and future emotional distress into account. He said, “it struck me on Monday after she was done with her testimony that in one way she’s living her dream – she is sought after, doing what she wants to do and what she has worked so hard for, being recognized for her achievements and accomplishments. But on the other hand, she is living a nightmare. And it will be that way for the rest of her life.”

The defense attorney was very good as well. He told the jury that just because something happens does not mean it is predictable (i.e., the hotel could not reasonably have foreseen what happened and stopped it, no matter how many security guards they had, etc.). He cited to 9/11, likening the stalker to a terrorist. He reminded the jury that the stalker had managed to record Erin at two other hotels and that he had been stalking and surreptitiously filming more than ten other celebrity women at hotels, in the same fashion. The stalker was a nutjob who traveled so much during his career (he was an insurance executive before going to prison) that he simply learned how to manipulate hotels in order to do what he did, a sort of perverted and maniacal mastermind. In my opinion, this is convincing and suggests that the Marriott is simply not responsible. He further stated: “Banks created bank robbers. Are banks responsible for bank robbers? The hotel didn’t create Mr. Barrett.”

It was very exciting watching two of probably the best trial attorneys in the whole country go toe to toe. In discussing this case with my former boss, attorney Rob Croskery, we both strongly agreed that this case will come down almost entirely to who is on the jury. The defense attorneys no doubt billed hundreds of thousands of dollars – if not millions – for defending this case. Erin’s attorneys are gambling big time because they could get a chunk of $75 million or they could come away with absolutely nothing. On Monday, the jury will begin deliberations and we will see who wins.