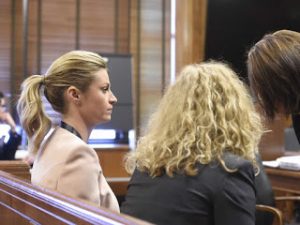 Day 4 of the Erin Andrews trial has now concluded. It seems there is plenty to go. So far, attorneys for Erin and attorneys for the Defendants have given opening statements and several witnesses have testified. Voir dire (jury selection) took an entire day. That is longer than it takes in most civil cases, but is not surprising given the magnitude of the case, number of parties (and lawyers) involved and the fact that the Plaintiff is a celebrity. It is still the Plaintiff (Erin)’s “case in chief.” This is the portion of the trial where she gets to call witnesses and introduce evidence.

The following witnesses have now testified:

1. “Several former employees of the Marriott,” including Jennifer Baxter (former food services manager) and Larry Strachan, another former manager. Baxter testified that it was policy not to give out room numbers, but another former employee stated that they were allowed to confirm guests were staying at the hotel. Strachan stated that it would not have been unusual in 2008 to accommodate a request to book a room next to another guest. Former front desk supervisor Nina Rivera-Keen stated that she was never given a written training manual on guest privacy, though she did remember being told not to give out guest room numbers.

An observation: it seems that just about every Marriott employee who testified was a former employee. Employee testimony can make or break a case, and is sometimes suspect. In a sexual harassment lawsuit, current employees often do not want to give strong testimony in favor of the Plaintiff, and against their employer, for obvious reasons. Former employees don’t usually share that concern, but, by that same token, they may have an ax to grind, which may allow the employer to call into question how believable they are. It is impossible to understate the significance that current and former employees can have in a case. Frankly put, they can make or break a case by their honesty or dishonesty. You can bet that Marriott representatives had their fingers crossed that these former employees were not disgruntled for any reason. Most likely, no one really remembered the day of the incident, because the video did not surface on the internet until about a year later.

It appears there will be no “smoking gun” testimony about, say, a front desk employee who knew what the stalker intended to do but helped him get the room next to Andrews anyway.

2. Steve Andrews (Erin’s father). He talked about his daughter’s growing interest in sports, and how her fame outgrew his in recent years (he is a television reporter in Tampa, Fla.). He became emotional talking about how the release of the nude video online changed Erin Andrews, saying it left her scared and in shock and afraid of crowds. Erin cried through much of this testimony. He described his own fear after the video was released that someone would further hurt his daughter. He said he was floored and dumbfounded when he found out that hotel staff had allowed Barrett access to his daughter. He also denied that the video was a publicity stunt.

3. Fred Del Marva, a private investigator with a specialty in hospitality industry security and liability. He said the Nashville Marriott violated standards of care by identifying Andrews as a hotel guest. He called releasing her room number “grossly inadequate” and the “cardinal sin” of hospitality. He claimed that the hotel being 100 percent booked should have prompted the staff to hire two security guards and use video surveillance on floors with guest rooms, though neither happened. He noted the hotel’s only security guard worked overnight and was also tasked with things such as delivering room service. He said the hotel violated its own policies in not checking peepholes to make sure they were secure. Some of these claims may be questionable – is it really a “violation of the standard of care” for the hotel not to go around checking every single peephole, every day? And would having two mall-cop-type security guards instead of one have made a difference? And is it really the cardinal sin of hospitality to identify a hotel guest? I seem to recall making phone calls to hotels (mainly before cellphones!), asking “may I please speak with so-and-so?” and being transferred to their room. Do we have an expectation that hotels are not supposed to do that?

4. Bernard Jansen. This expert witness for Andrews is a professor at Penn State who has written/co-authored four books, won awards for software development and edits scholarly publications. He was asked to testify as to how many people have seen the video, after doing an investigation to determine that. Jansen looked primarily at search data from Google and Bing. He testified that, in his opinion, “16,800,000 and change” people saw the Erin Andrews peephole video. Jansen claims he has never testified in a trial before, but he was paid handsomely: $300/hour for about 100 hours.

Also, the video was shown to jurors on day 4. According to a reporter who was present, one woman on the jury kept looking away. Apparently the stalker also recorded Andrews in an Ohio hotel, and a short clip of that video was shown as well. If Erin wants to sue the Ohio hotel, I know some good Ohio attorneys I could recommend.

Last side note: the stalker videotaped Andrews in 3 different hotels. He put an immense amount of time and energy into following her around and arranging to get rooms next to hers. How terrifying and awful. However, the fact that he was able to do this at multiple hotels does lead me to question whether the Marriott is really responsible. For live updates through the rest of the trial, click here.