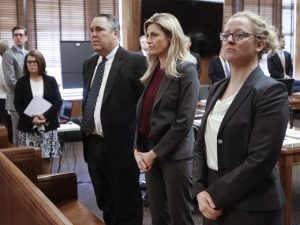 Today, the Erin Andrews trial enters day 8. It is possible that all the testimony will be finished today, though things have a way of taking longer than expected in civil trials. My guess is that the testimony will wrap up tomorrow (Friday), and that closing arguments will take place on Monday. Closings will easily take half-an-hour to an hour each, possibly longer, and Erin’s lawyer gets to give “rebuttal” after the defense attorneys’ closing arguments. It would seem a challenge to fit them in by the end of the day tomorrow, and it would probably not be best for the jury to hear closing arguments and then go home for a weekend and start deliberations on Monday morning. But who knows? Maybe the witness testimony will be complete today and closings and the start of deliberations will begin tomorrow.

Here are some highlights from days 6 and 7:

1. The Marriott called its own expert witness to testify. Stephen Barth, a professor at the University of Houston’s Conrad N. Hilton hospitality management college, testified for the defense that based on his review of the case, hotel staff did not violate procedures in place in 2008. He suggested Andrews’ lawyers were asking the jury to make assumptions about what actions hotel staff might have taken to let Barrett book the room next door to the television broadcaster.

Erin’s lawyer did his best to cross examine Barth. In one instance of very clever questioning, Erin’s lawyer grilled Barth on his testimony that having more security guards would not have made a difference, i.e., would not have prevented the stalker from doing what he did. In all reality, this is probably true. What difference would having one extra security guard make, as Plaintiff expert witness Fred Del Marva suggested? However, Erin’s lawyer got creative, asking Barth if he ever speeds in Texas (where he lives). Barth admitted that he did. Erin’s lawyer then followed up by asking him if he slows down when he sees a police car, and if more police cars being out makes it less likely that he will speed. A clever analogy, to be sure.

2. The Marriott called a second expert witness as well. Kimberly Brown, a psychologist at Vanderbilt University, said she evaluated Andrews three times, diagnosing her with mild post-traumatic stress disorder. She said she believed Andrews’ symptoms would disappear with treatment, citing treatment that is given to soldiers when they come home from war (a good way of showing the jury that while what happened to Erin is terrible, there are people who are much worse off).

When Erin’s lawyer cross-examined her, he asked her who knows better – Brown or Erin’s parents – how Andrews is when she is off camera, when she “lets her hair down.” Brown answered that the family has subjective viewpoints and knows things like her favorite foods, etc, while a trained psychologist has an objective view of the issues a person is suffering. Brown made it clear that she is “not at all” telling the jury that Erin is not affected by what happened, or that she is faking or exaggerating her symptoms in any way. She has “legitimate” issues, according to Brown. Still, she says, Erin’s PTSD symptoms are relatively mild in that they do not cause significant impairment on her functioning. Remember, Erin’s career has truly thrived since (or, some would say, despite) the incident.  One big point that I think the jury may find significant: Erin delayed in seeking treatment. She did not start receiving counseling until 2012, approximately 3 years after the naked video of her was released to the Internet. This is a point that is often used against Plaintiffs claiming emotional distress, in many different types of cases. I would not be surprised if the jury remembered this.

3. Another significant development is that the Judge denied the Marriott’s “Motion for Directed Verdict.” This is where the defense argues that there is not enough evidence for any reasonable jury to find in favor of the plaintiff, asking the judge to “direct a verdict” in its favor “as a matter of law,” rather than let the jury make its own decision. So the case will go to a jury.

It will be very interesting to learn what the verdict is. Here is a link where you can watch day eight live.