An Obvious Lesson From 50 Cent: Be Careful What You Post on the Internet if You Are Involved in Litigation!

It appears that Curtis Jackson, the rapper known as 50 Cent, has kept his lawyers (and the lawyers of several others) busy. 50’s motto is: Get rich or die tryin. Or, alternatively, file for bankruptcy protection, it seems.

50 has many debts, including a $7 million judgment against him resulting from a sex tape dispute. Side note: if you post a sex tape with another person’s current girlfriend on the internet as part of a “rap war,” litigation may ensue. Hopefully 50 won the rap war, because he sure lost in Court. However, that is not the focus of this blog post. The lesson (which should be obvious, but apparently was not to 50 Cent) is that you should be careful what you post on the internet.

50 Cent is going through a “Chapter 11 Bankruptcy.” Essentially, he is claiming he is broke (or nearly broke) and needs a “debt repayment plan” to pay all his creditors. He presumably makes too much money and/or has too many assets to qualify for a “Chapter 7 Bankruptcy,” which would probably wipe out most of the debts entirely. His creditors filed a proposed debt repayment plan that his lawyers claim is too hard on him. Creatively (and perhaps a bit dramatically), they argued in Court filings that the plan rises to the level of slavery, stating:

The plan violates the Thirteenth Amendment’s prohibition on involuntary servitude. Both Congress and the United States Supreme Court recognize that, by requiring an individual debtor to commit future earnings to the funding of a plan, [the bankruptcy law could] run afoul of the constitutional prohibitions on peonage and indentured servitude. 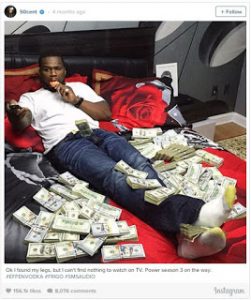 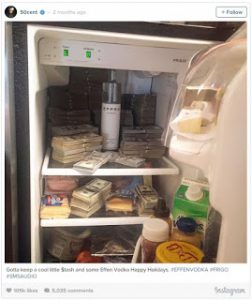 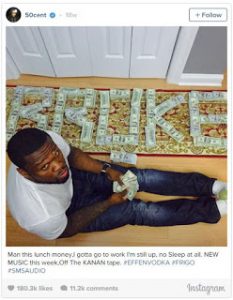 50 has said: “I spit sh-t, slick sh-t, so quick you miss it.” Well, these photos were not slick. And no one missed them, especially not the lawyers representing 50’s creditors. These lawyers and their clients are tryna get paid. They saved the pictures and showed them to the Judge. Not surprisingly, the Judge is hauling 50 into Court to explain why he has so many C-notes when he is claiming in sworn court filings that he is broke.

So, obviously, be careful what you post to the internet! It can (and will!) be used against you in a court of law…