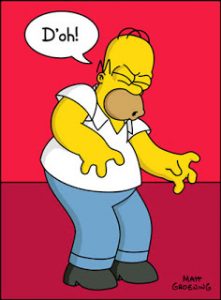 Ohio’s Eleventh District Court of Appeals recently decided the case of Eyajan v. Eyajan. This was a case involving a domestic violence civil protection order, apparently between two people who were related.

The civil protection order was granted, on facts that we will never know. The Respondent was unhappy and tried to appeal, pro se. However, she filed her appeal one day after the deadline. This case is noteworthy in that it explains how the deadline works and when it is extended. Also, Ohio Courts of Appeals apparently have no power to extend the time for the filing of a notice of appeal – filing it late is a “fatal jurisdictional defect.”

Here is the relevant analysis:

{¶5} Civ.R. 58(B) directs the clerk of courts to serve the parties with notice of the judgment within three days of entering the judgment upon the journal. If the Civ.R. 58(B) service does not occur within three days, the time to appeal does not begin to run until service is made and noted in the appearance docket. Coles v. Lawyers Title Ins. Corp., 163 Ohio App.3d 659, 664, 2005-Ohio-5360.

{¶6} The record in this case clearly shows that the trial court issued its judgment entry granting the petition for civil protection order on November 17, 2016. On November 21, 2016, the clerk of courts noted on the appearance docket that copies of that order were mailed to the parties. Since service was not made on appellant within the three day period required in Civ.R. 58(B), the thirty day time period began to run on the date service was made and noted on the docket, i.e. November 21, 2016. Accordingly, the deadline for appellant to file her notice of appeal was December 21, 2016, which was not a holiday or a weekend. Accordingly, appellant’s December 22, 2016 notice of appeal from the November 17, 2016 entry was untimely.

Who knows what happened in this case. Perhaps the Respondent went to the wrong court to file the notice of appeal at 4:25 pm on the deadline and didn’t have time to get to the right court. While this should go without saying, always try to file anything with a deadline at least one day before the deadline. Also, make sure you file it in the right court.